Monday, June 11th:
The week started out cloudy. I headed for the woods.
I had decided to visit Frontenac State Park this year, never having gone before, and I'm so glad I did! I ended up doing half my paintings there. I've only just begun to get acquainted with the place, and will have a lot more exploring to do in the future. Along the Upper Bluff Trail there were a couple of places with large fern beds on the steep hillsides facing the river. I set up my easel near one of these.
Just the right sort of place to spend a few hours quietly, taking in my surroundings, all the colors and sounds and fragrances of the woods, occasionally flicking away a spider or an ant or being scolded by a squirrel.
My easel and gear can get pretty heavy, and are always a bit cumbersome. I carry it all on my back and plod along like an overgrown turtle. This week I tried something new and brought a small folding scooter with me to use on paved trails. It got me around a lot faster, and wasn't much to wheel along with me in the places I couldn't ride.
The day continued cloudy, but as the sun went down the clouds broke up a bit. I had my back to the sunset, looking out over Lake Pepin at the softer colors of the sky and the patterns on the water.


Tuesday, June 12th:
The clouds continue.
Had a good time painting with Jim Turner, who had found and got permission to paint at this little homestead on the previous day. I spent the humid morning wrestling with roof angles and flat light. 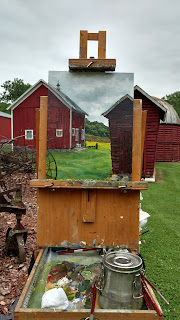 Jim's second painting was of me still working on my first!
In the evening there was a cookout/potluck dinner for the artists and volunteers. I was late, but was glad I showed up. A beautiful location, and some good conversation.
The sky was clearing and the clouds were getting interesting, and on leaving I made a quick decision to head out towards the country and try to capture the clouds in paint. It was a mad dash to paint them before they changed too much and before the light faded! I didn't have quite enough time. I may work on this one again and see if I can fix a few things.


Wednesday, June 13th: Blue sky!
I headed back to Frontenac State Park, sat on a picnic table, and painted the early day.

In years past this plein air week was my time away - a break from caregiving, and a time to focus on painting. During the week I'd call home, checking in to see how my Grandma was doing, worrying, discussing her and her care. At the end of the week I'd return, exhausted. Often I'd be up with her in the night to follow - sometimes it was a battle of wills as I'd try to get her to drink more, or we'd sit together and talk or sing. I'd long for sleep, but give thanks that she was there. I miss her.

Still feeling my own loss keenly, I was perhaps extra emotional when it was announced Friday night that my painting "Joy in the Morning" had been selected for the Dan Guida Award. Dan was the longtime director of the Red Wing Arts Association and an enthusiastic force behind this plein air festival. His family created this award in his honor and memory, and I am deeply grateful.

Wednesday evening I returned to one of my favorite places: Rattlesnake Bluff Trail in Wacouta, Minnesota. Another study in greens. The trees cast shadows across the trail and grass and into the field, and the rocky face of the bluff caught the late afternoon sunshine.


Friday, June 15th:
A hot, humid morning. Squeezing in one more painting, before framing and delivering three paintings to the gallery. 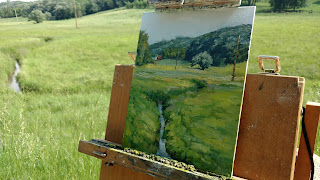 A beautiful little farm off the highway, with rich pastures, colorful cattle, and noisy guinea fowl. More greens. A little creek cutting through the pasture, and a silvery willow tree in the distance.
Friday evening was the special "First Glimpse" and Award Reception, a ticketed event. Judge Lisa Stauffer did a great job of speaking about the art, encouraging notice of and appreciation for technique and portrayal of atmosphere in the works. I was so happy to see Jim Turner receive Best in Show for his painting "Men at work"! Derek Davis got second place for "Back in the Saddle", and DK Palecek received third place for her painting "Late Sun". Dan Wiemer's painting "Majestic Maiden Rock" received the "Best Sense of Place" award.

Saturday, June 16th.
I awoke to the sound of thunder and rain. It had lessened somewhat by 9am, when the quick-paint competition started, but an occasional streak of lightning still flashed across the river and every so often I had to put up my umbrella as the rain blew in under the roof of the depot, where a few of us had taken shelter to paint. I did like how the rain changed the view and softened the distant trees.
At 11am the horn sounded and it was brushes down! Time to blow off the rain drops that still clung to the painting, and get it framed and into the gallery. Artist Greg Lecker took the award for the quick paint.


Now I will admit something here: early in the week, I hurt myself. I was zipping along on my scooter, scoping out painting locations (and, really, because it's fun and I'm only a kid pretending to be a grown-up) when we parted ways and I met the pavement. This incident slowed me down; I had to be more careful, couldn't hike far, had to spend more time patching myself up.  (Yes, guy at Walgreens, I am back for more bandages...) To adapt a famous quote, plein air painting is hard, and it's harder when you're stupid. But my bruises are fading and my new skin is coming in nicely. I still had a great week. Good times with painting friends, and a good dose of time alone. I met some lovely people, a dog who tried to make off with one of my shoes, sunshine and clouds and innumerable shades of green.
The show will be up till August 5th, and I hope you'll get a chance to stop in at the gallery to see all the work and pick out your own favorites.
https://redwingarts.org/
Posted by H.C.H. at 5:34 PM No comments:

The Month of May

May 4 - spring in the woods. The browns of last year's fallen leaves broken up by the greens of Dutchman's Breeches and wild ramps.

May 6 - spring paint-day at the farm. A great group of artists came out to the farm to paint. It was so fun for me to see some old painting friends and meet some new ones, and to see this place I love portrayed through the eyes and art of others.
This is the painting that I did towards the end of the day. The fields were getting so green, and the trees of the woods were leafing out.


May 9 - an attempt. Apple twigs, leaves, and blossoms in one of my favorite pieces of pottery. This was so much more difficult than I anticipated. I hope to try again next year.

May 11 - another attempt. These cuttings off the apple trees were still in bud stage, and I painted them in an old "Atlas" canning jar. A very fun challenge.

May 14 - A rainy Monday. The woods were turning all sorts of green, and the wet weather brought out the deeper colors of the bark of the trees.

May 15th - I always like to see how the hickory leaves unfurl from their flower-like buds in the spring.

In the evening I went out in the fields. The trees and the fields were becoming greener, but hadn't yet put on their summer colors. The shadows on the bluffs looked blue as the light faded.


May 17th - I started this one late, after spending time working in the orchard clearing brush from between the rows of trees. The light was so pretty that time of day, but so fleeting! I didn't have enough time to finish and I ended up going out again a few days later, May 22, to put the finishing details in. The blooms were a bit sporadic this spring, the result of a very heavy bloom last year which was the result of a late frost that took out much of the crop the year before! By this time the grass was growing tall and green, and the air was filled with the scent of the blossoms and the buzzing of the bees hard at work.

May 19 - The weather turned unusually cool this evening as I went out to try to capture a little of the dandelion-filled fields. A north wind blew and the sky clouded over.


May 24 - Cloud study. This was one of those days when I just didn't have enough time to do what I wanted on location. But I had a start, painted in the bones so to speak, and finished it up at home that night.

May 26 - Hot, humid weather. In the evening I went down towards the woods and set up in the shadows of the trees. The light from the sinking sun shone on the tops of the trees on the edge of the woods and lit one of the little trees that grow along the fence that separates pastures.

May 29 - Some beautiful blooms off of the bridal wreath bushes that grow by the house. I love the expressive shapes of the draping branches.


May 31 - One more chance to paint the dandelions. A quick little study before the darkness fell.