July 27- Rainy day painting at Little Bean's Estate. "Little Bean", my youngest sister, doesn't actually own the place, but would if she could, and sometimes I take her up there just to look around. There's a beautiful view overlooking a marshy part of the landscape near the river, and on this day, with the rain and constantly changing clouds, the bluffs appeared and faded along with every fluctuation of the weather. 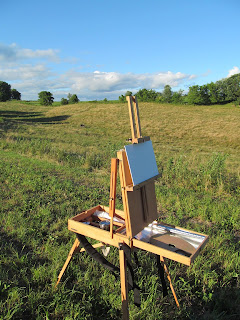 July 28- Gorgeous evening; sunny, cool breeze, just enough clouds to keep things interesting. Watched the shadows grow and spread over a hilly bit of pasture. Was going to paint the cattle grazing there, but they moved on too quickly, the fickle beasts.
It was great to be out in the fields, observing the changing colors of summer, and the Queen Anne's Lace growing thick along the fence line. It was time to quit when the wind died down and the bugs came out.
Posted by H.C.H. at 12:52 AM No comments:

Home after a week spent in and around Red Wing, Minnesota, taking part in the annual Red Wing Plein Air Festival. I had such a good time- it was great getting away for a while and having lots of painting time! And it's always inspiring and motivating to see so many other artists and the work they produced throughout the week.

This was the first little painting I did on Monday, looking across the river at the boat houses.
Later that afternoon I hiked up, down, and around Barn Bluff. I love the woods and all the familiar spicy and earthy scents therein. The mosquitoes were pretty bad on the way up, but once I got to the top there was a nice breeze. Later, while I was painting, it got quite windy up there, and not blowing off the bluff goes on my list of things to be thankful for. :P

Tuesday afternoon was spent painting in downtown Red Wing. It's a beautiful downtown, with great old buildings, but my painting... left a lot to be desired. Its new home is a cardboard box.
In the evening there was a picnic (yay!) and the park where it was held had some fabulously huge cottonwoods, and the air was thick with their fluff.

Wednesday afternoon it poured. After it let up I drove out to the west of town, but by the time I got to the farm where I was going to paint, the sky was getting dark again and I could hear the rumbling of thunder. I drove around a little, but the sky just got darker. I pulled off to the side of a gravel road and tried to capture what was happening. I spent a lot of the painting time for this one in my car, and added not getting struck by lightning to my list of things to be thankful for.


In the evening I drove through Lake City, and stopped to watch the clouds over Lake Pepin.

Thursday was a beautiful, hot and sunny day. Good weather for drying hay. Thanks to Jim, another artist who had found this farm previously, and to the farmer who let us paint there! I feel right at home painting in a hay field. :) I loved the character of that little barn in the background.

Thursday evening I had planned to try to paint the sunset, but got out kind of late. That's when the sky was most beautiful, but as I checked out different vantage points around the park, I was keenly aware of the time slipping away. I knew I'd have very little time to work, and almost didn't begin. This was a sprint of a painting, done at a fevered pace, watching the sun slip behind the bluff, and the clouds change shape and colors.

Friday was framing time, and turn-in. We were each allowed to put three paintings in the show. Then we were treated to a tour of the Anderson Center, which was great. In the evening was held the cocktail reception- great food, drink, music, and first dibs on the week's art! Awards were presented, and I was surprised and very happy to receive one of the Judge's Awards for my sunset painting. This year's judge was Scott Lloyed Anderson, whose work I've long admired, and it was really nice to meet him and to see some of his paintings in the show!

Saturday morning was the Quick Paint along the river. The morning was positively cold! If some of my paint strokes are a bit more wobbly than usual, it's because I was shivering.


The show runs till August 26th at the Red Wing Depot Gallery. Go see it!

A heartfelt thanks to the Red Wing Arts Association, and everyone who helps to put this festival together, and a special thank you to those who are giving new homes to some of my paintings from this past week!