September brought my first trip up to Grand Marais, Minnesota, to participate in Plein Air Grand Marais. I'd heard about this gathering for years, and this year brought an unexpected opportunity to join in.

September 8, 2018:
I spent the morning exploring Cascade River State Park. The sunshine was warm, and I was not prepared for how cool the wind would be later on when I returned to paint, stepping across the stones in the river to set up my easel on a little island midstream.

September 9, 2018: More exploring, this time mostly from the car. I passed this barn a couple of times before deciding to stop and ask if I could paint it. The barn, about 100 years old, was awaiting a new roof. A couple of pigeons flew over my head, returning to the peak of the roof where they were clearly at home.

September 10, 2018: The sun peeked out every now and then, but the clouds took the day.
I spent more time exploring, driving and stopping anywhere that looked interesting. I walked some ski trails until I remembered the existence of bears and scared myself.
I ended up at Sugarloaf Cove and painted on the rocks. The light and color of the water changed quickly as the rain passed by in the distance.
After nightfall, I joined artist Naomi Tiry-Salgado to paint in downtown Grand Marais. Despite the wet weather there were other painters out around town, too. I set up in a doorway to partially shelter my easel from the rain, accompanied by an umbrella and hot tea, across from the "World's Best Donuts" (unfortunately closed at night!) The wet street made for some great reflections, and a street light glared off the back of a stop sign. The tall white building was once the Light Keeper's house, built in 1896, and is now a museum. I returned a couple of nights later to tighten up a few things on the painting before calling it finished.

September 11, 2018: Back at Cascade River State Park, at a place I'd found while hiking around on the first day. It's a beautiful spot, with deep shade, thick moss, and rich color; but the painting was a fight. I returned the next day to work on it again, and in the end I brought it home with me. There are lessons in this one, I think, but it may take some time to really learn them.
Later I painting along Highway 61, a few miles outside of Grand Marais. I was taken with how the evening sunshine brought out the shapes of the trees and all the roadside color.

Thursday, September 13, was the 2 hour quick paint event in Grand Marais. It was the last painting I'd be doing, and the last part of Plein Air Grand Marais I'd be participating in. I was running around like a chicken with its head cut off, framing and dropping off paintings and thinking about all that I needed to do before and after my long drive home.
I was late to set up painting, but at that point I didn't really mind. This was the icing on the cake; I wanted to give it my best but also just enjoy it. It was time to be still, to be quiet, to learn and to rejoice.
After the fight of my other woods painting I almost didn't attempt this one. But there was just something about these backlit boulders, their edges and moss-covered angles, that caught my eye and held it. Beautiful.
A quick dinner with friends and then it was time to hit the road. I left grateful for the opportunity I had to participate in this event, time spent with acquaintances new and old, all the people from Outdoor Painters of Minnesota who were involved and worked so hard to pull it all together, as well as those from the Johnson Heritage Post Art Gallery, which held the show from the 14th through October 7th. I didn't get to be there for the opening, but I got a wonderful surprise when I heard that "The Light-Keeper's Place" had received the 1st place award for the Night Paint category! A big thanks to judge Jeffrey T. Larson.

Friday found me home again packing up for the Driftless Area Art Festival, which took place on Saturday and Sunday. Severe damage from recent flooding caused the festival to be moved from its usual location to the fairgrounds in Gays Mills, Wisconsin. The volunteers did such a great job in organizing this last minute change! For me, this is always a special event, in the middle of a special part of the Midwest.


The weekend was unusually warm for September, but I think we were all glad for the sunshine and lack of rain. A huge thank-you to everyone who showed up and made it memorable, interesting, and so enjoyable.

Monday, September 17th.
The sixth annual Plein Air Between the Bluffs outdoor painting event had begun on the 7th in La Crosse, Wisconsin, and I was glad to get a few days to join in. As I set up to paint, the afternoon's sunshine gave way to storm clouds. I'd nearly finished painting when the wind whipped up and it was time to bail. I was able to return a while later, between the first storm ending and the second beginning, to put the final touches on the piece and watch the distant lightning. 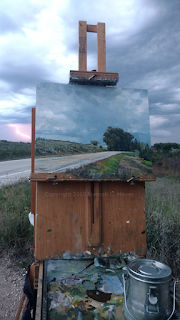 Tuesday, September 18th, in Dresbach, Minnesota down by the Mississippi River. It was a mostly grey day, but a little bit of blue sky showed above the river and soft light shone on the trees in the late afternoon.

Wednesday, September 19th. A soft rain fell in the woods below the orchard on the farm, where the cow paths converge and split as they wend their way through the aspen trees. The greens of summer were beginning to give way to the coming colors of fall.
The public opening for the show was held at the SG1311 gallery in La Crosse. It was great to get to see all the new work, and talk with the other artists and people who came to the show.  Beth Bathe, who judged the show this year, gave a talk, and the gallery dog made his way around the room, hoping for a dropped hors d'oeuvre. I was very happy to receive a Merit Award for my "Quiet Thunder" painting, and even happier that two pieces found new homes.

P.S. Pasture Studies: closing out the month with some quiet painting on the farm.