The month of February began with sunshine, and a goal to get out into it as much as I could.
2/1: The sunshine, though brief, was extra welcome after a particularly cloudy January, and it was good to get out to the woods and paint. The early afternoon light shone on a wild apple tree, and the sun cast blue shadows across the deep snow.
***

2/2: A birch tree in the woods. The sun sank behind thin clouds to the west, softening the contrasts and colors of the evening landscape.
***

2/4: Trying to escape the bite of the north wind, I found myself returning to the shelter of the orchard. As usual, the deer had made themselves at home there, and the snow around the trees was crisscrossed with their tracks.
***

2/5 (and 2/8): Further snow-study. I loved the strong blue that seemed to envelop the snow- and tree-covered slope in shadow, while the soft evening sunlight lingered on the stones and oak tree that occupy the corner of the hillside pasture. It was a bit more than I could manage in the short time I had before the sun set, and I returned to the same place a few days later to wrestle with it a little longer.
***

2/6: Golden light, the moon rising over the old oak tree, and the shadow of the hill slowly climbing as the sun sets.
***

2/8: Small, cold, color studies, as the sun set and the full moon rose above the tree tops.

2/15: The sun setting behind me gave so much color to the snow and the tangle of vines at the base of these trees.
***

2/17: Painting in the field, watching approaching snow showers, the afternoon sun occasionally visible through the clouds.
***

2/22: I received a box of lemons from California in the mail and they were too pretty not to paint, their bright yellow next to the blue-tint of an old canning jar from my Grandma's kitchen.

2/24: A layer of thin clouds made for subtle light and color at dusk. Snow and scrappy trees.
***

2/29: Leap-day painting. The day had been a persistent grey, and I began my painting with a plan to focus on the dark water and soft color shifts of a cloudy day. I had just sketched out the rough shapes of the scene when I looked up to see blue sky, and the last trace of cloud quickly disappearing. My footprints in the snow caught bright sunlight, and the creek changed from slate to deep blue.
My grey-day painting was ruined, but I can't say it was a complete loss. :)
***

January 6: Painting in the orchard. Apples that were too green for harvest froze on the trees and had turned from yellow-green to a rusty red, giving a blush of color to the tangled branches.


January 20: In the midst of a very cloudy stretch of winter, a rare day of blue sky and sunshine, and no wind. I liked how the light shone on this hickory tree along a fence line. There were few tracks in the snow, but just before I began to paint, the dogs spotted a rabbit and the chase was on. The rabbit got away, and the scene had changed.

January 28: A small study on the edge of a cornfield on another cloudy evening. There was just a hint of color at the horizon to indicate the sun was setting, and the dry leaves on the corn stalks rustled in the wind. 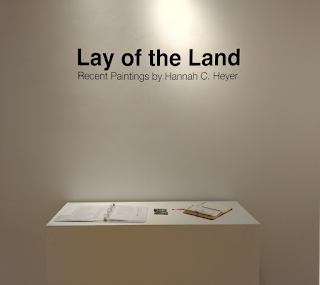 From mid-January to mid-February I had a solo exhibition at Saint Mary's University in Winona, Minnesota.
I showed forty paintings, mostly oils plus a small collection of watercolors, which spanned the seasons and meandered through my beloved fields and woodlands. 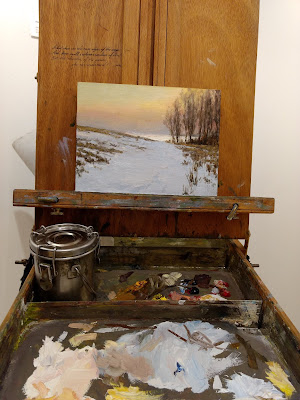 I also had a couple of opportunities to speak with groups of students, while painting these small demonstration pieces.

Some pictures from the exhibit: 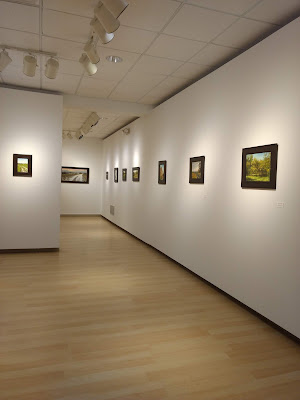 A painting from last spring, when the fields were beginning to green up and the sky foretold a spring shower. 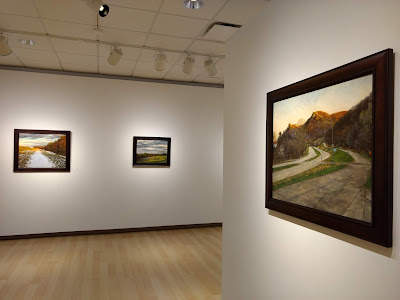 This piece, of two distinctive bluffs along Highway 61 in Minnesota, was done over several days on location, plus more work back indoors, as I tried to catch the late light as it hit the peaks of the bluffs. The air was cool, and the leaves of the trees were only beginning to unfurl along the highway. I painted to the sounds of the spring peepers' persistent song and an occasional passing vehicle.

"An Early Snowfall" was worked up from a small 5 x 7" plein air piece done in early November, when a blanket of snow fell over the still green fields and leaf-clad trees of the woods. A beautiful combination of warm evening light and cold snow underfoot.

Done en plein air over several evenings, as I tried to capture in paint the moments just at dusk when the north sky briefly held on to the colors of sunset before fading to the grey-blue of twilight.

This one was done in one of my favorite places in the woods. The steep hillsides were covered in snow, with the afternoon sunlight slanting through the trees and the blue shadows on a neighboring bluff visible through the branches.

This painting was done in late October, in the pasture, the oak trees nearly at their peak for color, and the grass still green.


Autumn in the woods: 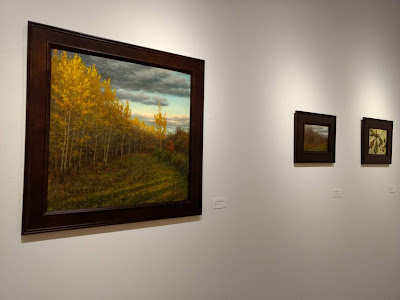 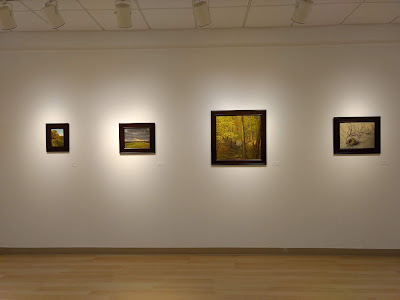 "Stille Nacht" began as a sketch one night in December as I walked home in the dusk, the afterglow of sunset lingering, and the moon rising. I knew I wanted to paint this, and did a small watercolor study as soon as I could, and then began the oil.

Home.
Another studio piece worked up from a plein air field painting, as September eased into October.

Peace.
Wishing you peace through this time, and always.