Mid-August brought me to Hudson, Wisconsin for the 3-day Plein Air Hudson outdoor painting event. It was a weekend of cloudy skies and hazy sunshine.

My first painting was in an alley off of Walnut Street. I was drawn to the shapes and lines of the buildings in the alley and the subtleties of color found there - the grays of the street and the weathered shed, surrounded by summer greenery with the darker trees in the background.
Later, I met up with a couple of artist friends who were painting the falls in Willow River State Park. I stayed long after they had finished up, working on my own interpretation of this place of rock and water. It is a popular spot in summer, though I didn't incorporate any figures into my piece.


Saturday, August 18.
Painting number 3: I wrestled with roof angles, loving the grasses and vines surrounding these outbuildings on a farm in Houlton. (Thank you to the folks who live here and were so gracious to the invading artists who painted on and around the farm that day!) This piece received an honorable mention from judge Joshua Cunningham at the opening.

I began this painting as dusk fell and the sun disappeared in the haze across the river. Lights began to glow in the dim; my eyes were drawn down the street past the facades of the buildings to the trees of the park. The light failed before I was satisfied, and I returned the next night to finish up a few things - like making the parked cars look a little more like cars and less like a large caterpillar sitting by the curb! I enjoyed this one.

Sunday, August 19.
A little study of the trees along a quiet spot near where the Willow and St. Croix rivers meet.
Later in the afternoon the sky clouded over again. I painted near a friend, and it was nice to have another set of eyes every once in awhile to give feedback and help work out problems in the painting. The clouds held my attention as they drifted above the dark trees along the river.

Monday evening held the opening at the Seasons on St. Croix Gallery - they do a great job, and it's a grand time filled with appreciation of art and nature and architecture, and some wonderful and meaningful conversations and connections.

And then, how good to be home again.

A few days later I did my final paintings for the month of August, out by the orchard, along a field taken over by goldenrod and milkweed.

July - and the rest of June

June 5: The field road cutting its way through the long grass, the dark brown of a newly planted field, the uppermost row of apple trees in the orchard and the edge of the woods. The evening shadows beginning to stretch across the fields as the day neared its end.
I wanted a little higher perspective for this painting, so I set up my easel on the top of a woodpile. 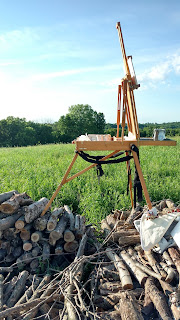 June 10: Hanging out with a painting friend, and warming up for the Red Wing plein air event. The view looking across the valley. So much green!

June 23: In the hayfield - timothy hay. Beautiful soft purples amongst the greens of the field. Red-wing Blackbirds and Bobolinks.
And clouds.

June 27th, evening. I wanted to paint the moonrise. I spent so much time wandering around, up and down hill and through the fields, that I missed the very beginning. But I set up my easel at the farm across the road and painted the moon rising over fields and fence-line trees.
As the light faded and the fireflies came out I painted another quick study. I love the colors at this time of night! The dogs, who know they're not allowed there, snuck across the road and greeted me with tails wagging - time to quit and take them home again.
But it was so lovely out, and the moon was so bright! I got a clip on light from the house and went out again, around 11pm, and began to paint while a few clouds passed over.

July 6: A storm passed through and spoiled some of the hay. It was baled and waiting to be picked up off the field. Windrows of cut hay lay out to dry in the summer sun.

July 9: An evening in the pasture. Gooseberry bushes around a great old oak tree. Shadows lengthen on the hillside, and the cattle, after a rest in the long grass, again slowly made their way across the pasture, continuing their grazing.
July 10th, evening, another attempt at a nocturne painting. A learning experience for sure! I've a long way to go.

July 15th, evening. After a long day of indoor work, I escaped outside to paint the sky. Two little cloud studies, one facing south, and the other north.

Also in July, I finished up a commission, and did lots and lots of framing in preparation for the Stockholm Art Fair in Stockholm, Wisconsin. 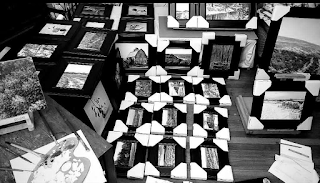 It was a beautiful day for the art fair, on the shores of Lake Pepin, and I had a great time. Huge thank-you to everyone who stopped by, and especially those who took home paintings! I'm so grateful.

July 25. One night I had picked some wild yarrow out of the pastures along the edge of the woods. I had them in a pint canning jar, an old one with very thick glass. The yarrow stems dyed the water yellow.


July 27: Another night watching the sky.
Clouds to the northwest:
And a quick little moonrise study:


July 30. My two-year-old niece has been spending the week at the farm. She's so sweet, and so wild, and she never seems to stop moving! Even in her sleep she is not still. But I tried a quick little study of her in oil paint during her nap one day.

July 31. We've had a few days with such beautiful cloud formations and I finally got out to paint some over the garden. I really enjoyed studying them and trying to figure out how to show their form and brightness. The garden was its own challenge with all those greens - from leeks, cucumbers, raspberries, corn - under the hot afternoon sun.