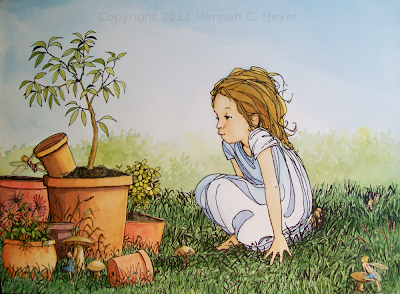 Catching up on sleep and work after a week spent in Red Wing, Minnesota.
I was so excited (and nervous!) to be a part of the fifth annual Red Wing Plein Air Arts Festival, June 20 - 25.
I ended up having a wonderful time, thanks in large part to a jolly group of super-talented artists that I got to hang out with throughout the week.
You guys left me feeling inspired and challenged; wanting to throw out half my paintings, and throw myself into the creation of more and better work!

There was rain and gray skies most of the week, which made outdoor painting a bit tricky.
My new easel held up well to the buffeting from the wind during the creation of this piece: 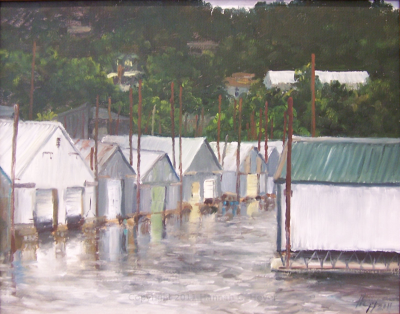 Just after I'd finished up, the tornado sirens went off. :-P
Then came the rain.

This was done sitting in the shelter of the depot later that afternoon: 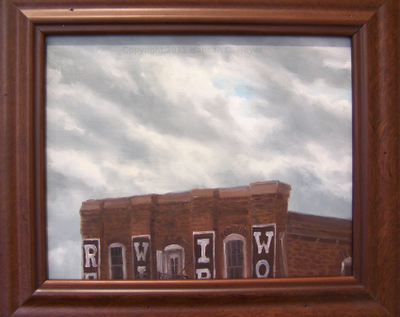 The old Iron Works building is really cool. I chose to just do the top against the clouds, where a little bit of blue sky made a brief appearance.

On Wednesday I was privileged to paint at a lovely farm outside of town. Driving out was like going home: big sky, rolling farmland... a Hannah in her natural habitat. ;)
The sky was so gorgeous, and there wasn't an ugly spot to be found. However, one of the reasons the sky was so interesting was because it was poised for a downpour. Just after I'd begun to paint, the clouds let loose. Even with my big umbrella I got pretty wet. 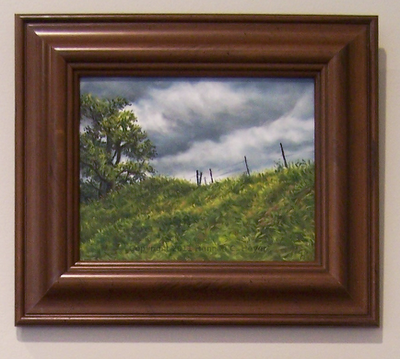 This painting was officially finished when a large clap of thunder and flash of lightning sent me scurrying to my car like a scared rabbit.
Thursday was more of the same, minus the interesting-ness of the sky. Had a good time painting, but my painting was as drab as they come, especially when compared the work of my painting buddy that afternoon. (If you go to the show, check out the watercolors of James Turner-- wow! Color explosion!)
Friday morning we all had assigned places to paint, and there was a map for anyone who wanted to find the artists and check out what everyone was working on. I got a late start, but had a good place to paint by the Golden Lantern. 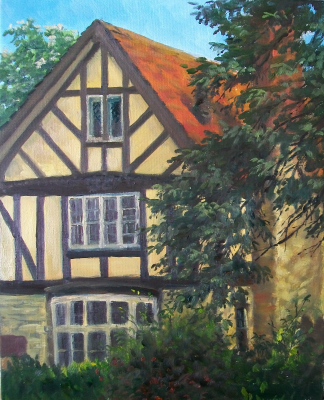 See that above the rooftop? That's what's known as a blue sky!

Saturday morning, from 10 until noon, was the quick paint. I loved the ivy growing up the side of this big old brick building, and focused on a small part of it. 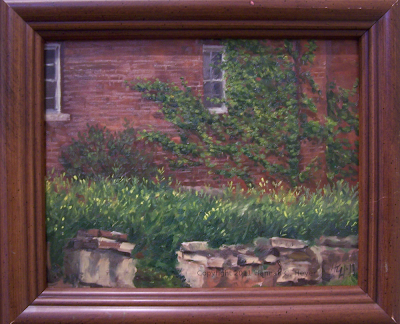 It was raining again by noon!

If you're in the area, you can check out the plein air fest exhibit at the Red Wing Depot through August. 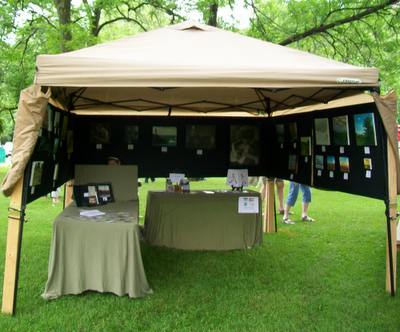 Sunday, June 19th
Art in the Park in Lanesboro, Minnesota.

A gloomy, uninviting day, always threatening rain. But there was good music, and some wonderful people.
A big thanks to everyone who braved the weather and stopped by, and especially to those who are giving new homes to some of my little works! :-)

I worked on some small paintings throughout the day, and had a good time with my sister, and our new Lanesboro buddy, both of whom were such a big help when it came time to pack up.
(Yeah, okay, they pretty much did everything!)
I've discovered I am not a quick healer, and was feeling pretty awful after doing too much lifting the previous couple of days. I'm so thankful they were there to give me a hand.

Labels: art in the park, June

Saturday was my 2 year plein air painting birthday. ;-) Two years ago at the Quick Draw at the Bridge event in Zumbrota, Minnesota, I discovered just how difficult painting en plein air really is.
I also fell in love with it. 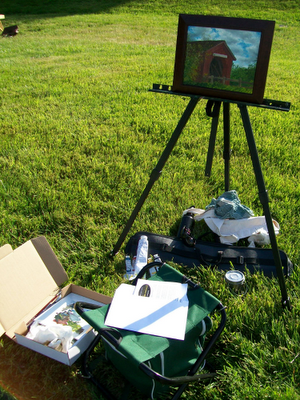 This was my set-up this year. ^
We had from 4:30pm until 6:30pm to complete our paintings, which then had to be framed on the spot.

Saturday's event was so much better than two years ago for me for several reasons: 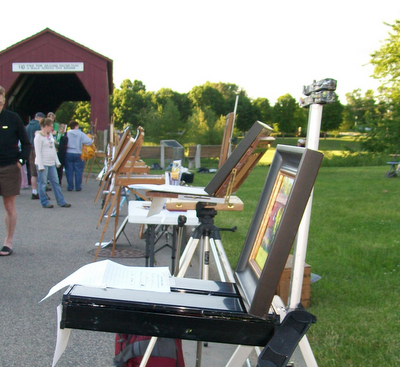 All the paintings were displayed until 8pm. Awards were given, and there was wine and cheese for the public. There was a free concert at 8 as well, but I couldn't stay. 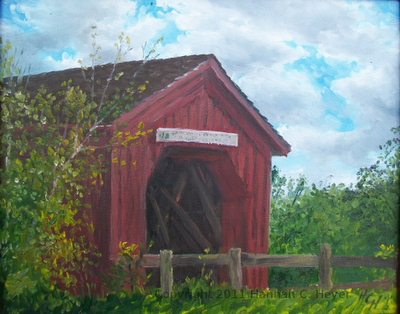 Here's my painting! It will be on display, along with all the "Quick Draw" art, at Crossings Gallery until the end of the month.
Part of the proceeds from the sales will go towards the care of Minnesota's last covered bridge.

what's on my easel 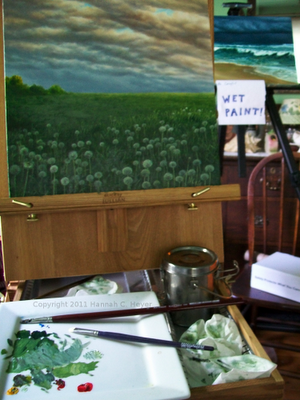 I've been staying with my grandma recently, and have temporarily transformed "my" room into a studio of sorts.
The walls are a funny pastel green, and the light isn't always the best, but it's got two windows that let in a lot of air and there's room for me to spread out.
Several easels, a jolly scattering of paint tubes and canvases, and two small tables filled with potted herbs and houseplants make it feel pretty homey.
Recovery from surgery has been slow, but I am healing and it's good to be working again.
Posted by H.C.H. at 9:10 PM No comments: