June 20-25 - time once again for the Red Wing plein air festival! This was my 6th year participating. Every year brings a chance to get to know the Red Wing area a little better. I found some new (to me) places this year, and revisited old ones.
My first painting of the week was on a farm that I'd admired and painted from a short distance away a few years ago. This time I got a closer look, and painted from another angle. It's such a beautiful place. The bittersweet beauty of these lovely old structures, with some rust, chipping paint, and failing shingles juxtaposed against the blue sky and lush greens of a summer landscape. These buildings are old and run-down. But they're still standing.

Monday night was a picnic and paint event at the Harbor Bar in Hagar City, WI. I didn't do a painting there myself, but enjoyed some good food and watching other artists work. Afterwards I headed back out with my gear to try to capture the moonrise. The Full Strawberry Moon. I chose a spot facing a place called Rattlesnake Bluff and a field of tall standing grain. I am not at all an experienced painter of nocturnes! If the folks in that neighborhood looked out and saw someone with an easel under a streetlight, with a cellphone for extra light, flailing around trying to avoid biting insects... well, I know who it was.

Tuesday. Time for a hike. Before the week began I treated some of my clothing with permethrin, so I could go into fields and woods with a little less worry over insect bites - especially from ticks, which have been pretty bad this year. I gathered all my gear - easel, paints, umbrella, etc. and hiked up Mt. La Grange, a.k.a. Barn Bluff. It was a hot hike, but there was a good strong breeze at the top. I followed the Prairie Trail all the way to the east end of the bluff, and found a nice out-of-the-way spot to paint, with a view of the river.
Here's where I was set up: 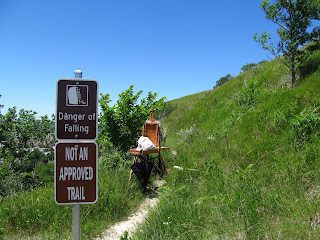 Here's what I painted:
The evening found many of us up on the neighboring bluff-top (you can drive up this one) at Memorial Park, painting the sunset on the first day of Summer. What a gorgeous night to watch the sky.

Wednesday - a day that alternated between flat, overcast skies and intense sunshine. I returned to Old Frontenac and took a walk around the neighborhood. Had to go back and visit the barn I painted last year. I found another artist working nearby, and decided to join her and paint a different view of the same place I admired so much last time. It has such a great old face, and I appreciate it all the more after struggling with the perspective of it and trying to get all the windows and doors to fit in their proper places. I'm also glad the owner hadn't gotten around to painting the old gate yet - the variations and the wood showing through gave me more color to work with. And the great old trees provided a fine backdrop.
Thursday morning started out cloudy and rainy, and I was so tired that my plans of getting an early start to the day just didn't happen. I drove around for awhile, got lost, and eventually got a better feel for one area outside of town, but no painting happened. After the rain stopped, it was still a very cool day. Perfect for another hike. This time I went up the other side of Barn Bluff, following the Quarry Trail with its cliff rising up on one side and the steep hill dropping off on the other. A fallen tree caught my eye and I had a go at painting it. The mosquitoes, when I was still, sitting in one place, were terrible, and I'd forgotten my bug spray. An extra shirt wrapped around my head helped keep the humming hoards away, and I could enjoy myself. I love being in the woods. The backdrop of cliff, rock, and gravel is quite different than what I usually paint and was a good challenge, and I reveled in painting the moss that covered the root flare of the fallen tree.
By the time I'd cleaned up and hiked back down the bluff, the day was far spent. I wanted to do one more painting, though, and headed back to the area I'd explored in the early part of the day. The sun was getting low - a beautiful light, but a fleeting one. I set up near a farm, hoping to paint the cows, but also eyeing up the steeple on the horizon. After I'd sketched in the latter, the obliging bovines slowly grazed their way right to where I wanted them and I painted them in too.

Friday was the day to pick three paintings, frame, and deliver them to the gallery to be hung. A private reception was held Friday evening, and awards were announced. I was so happy to receive an Honorable Mention on my first painting, "Still Standing"!
This year's judge was Kathie Wheeler. I was first introduced to her and her work the first year I did this event, and I've been a fan ever since.

Saturday morning was the quick paint. I had picked the spot I planned to paint the night before, but the morning started out hot, with a promise of getting even hotter, and the spot I'd picked was in full sun. I changed course, and ended up painting something different than what I'd planned, and also sort of revisited something I'd painted last year. But I don't regret it. It's amazing, though, how quickly two hours go by when trying to paint a complicated mass of ropes and cables in changing light.
The show will be hung till late August, and can be seen at the Depot Gallery in Red Wing, Minnesota. Stop by and see the whole show!