The new year started off with nights of fog and days of frost - more specifically, rime ice - coating every blade of grass that stood above the snow and every twig and clinging leaf on the trees. 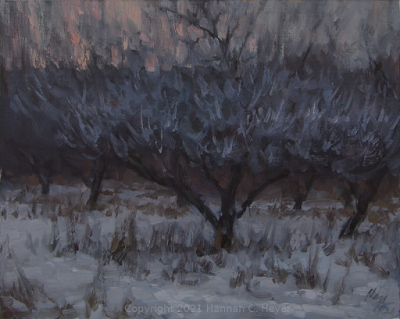 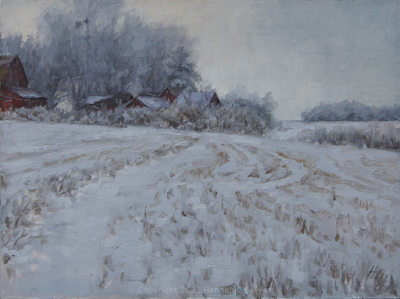 January 3rd: "Rime Time". The colors and textures of the icy trees and landscape were enchanting. The sky shifted from moody grey to a soft yellow as the sun struggled to clear the clouds. 9 x 12" plein air oil on linen/birch. Sold. 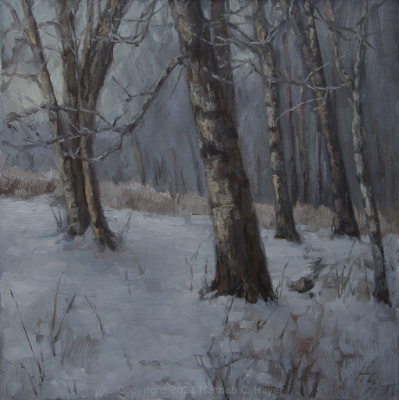 January 4th: Standing under the trees, trying to catch something of the atmosphere and contrasts. The old birch trees in the foreground stood out sharply from the softened form of the frosted trees of the woods behind. The night was warming, and the frost began to fall from the branches. I returned the following night to do some small adjustments just before dark. 10 x 10" plein air oil on linen/birch. 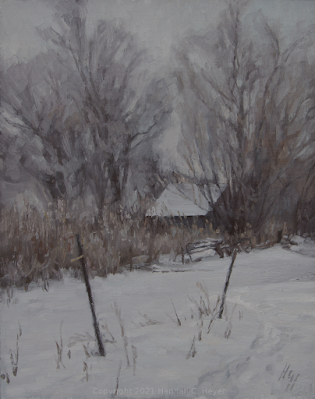 January 10th: A damp wind was blowing from the west across the fields and pasture. The snow-capped corn crib was nearly hidden among the branching willows and aged maples of the farmstead. A study in subtle color shifts. 14 x 11" plein air oil on linen/birch. 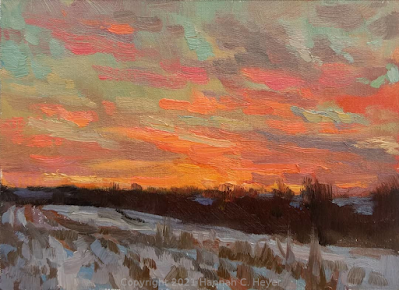 January 12th: A small study of a brilliant winter sunset! It was magnificent. 5 x 7" plein air oil on linen/birch. Sold. 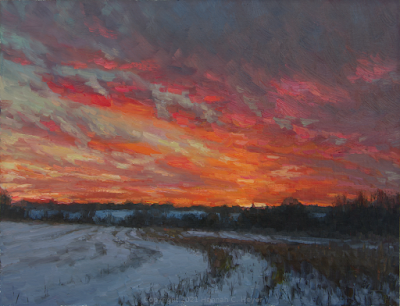 As I walked home after painting, I kept turning around to watch the sky, watching the colors change and deepen. This was my attempt to recapture my impression of it back home, in studio, going from field sketches and memory. 14 x 18" oil on linen/birch. Sold. 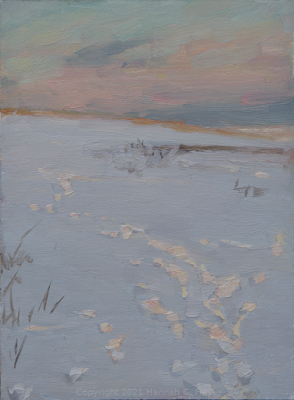 January 18th: A rough little snow study. I continue to be amazed by all the colors of "the white stuff", depending on weather and time of day. This was just about dusk, the soft light of sunset reflected in the eastern sky and tracks in the hillside snow. Sold.  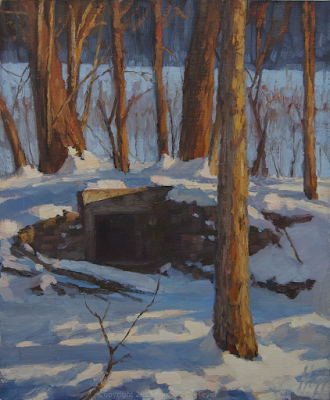 January 22nd (and 26th): Searching for a place out of the wind, wandering in the woods, I found myself at this old culvert, half caved-in, a remnant of an old road now overgrown in trees. The afternoon sunlight cast strong shadows, and though the air was frigid, the warmth of the light reminded me that spring is not far off. 10 x 8" plein air oil on linen/birch. 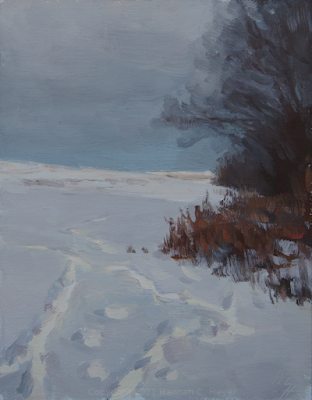 January 25th: Another evening snow study. The sky was heavy with clouds, and I admired the slight variations in the whites of the snow on the slopes of the fields from the more shadowed foreground to the distant hillside. 8 x 6" plein air oil on linen/birch. 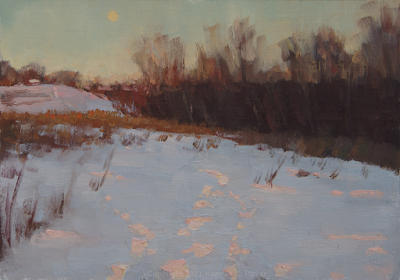 January 27th: Moonrise in a clear sky. I loved how rich the colors were as the sun set to the west and shone its light on the broken snow and rise of the hill. 7 x 10" plein air oil on linen/birch. Sold. 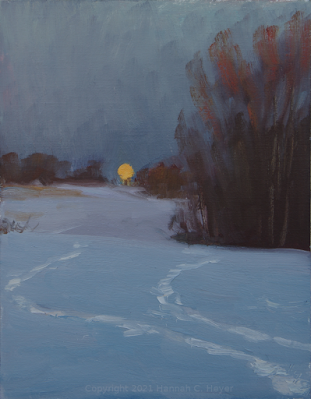 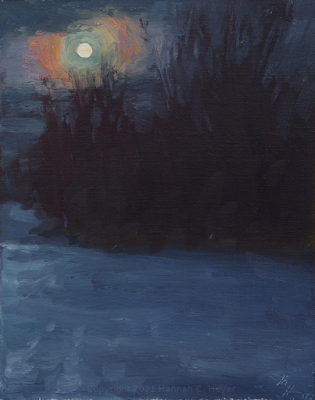 And as the darkness deepened, the moon rose higher in the sky, and a thin veil of cloud surrounded it in a ragged-edged ring of color. My fingers were growing cold inside their mittens and it was time to leave the wonder of the moonlit landscape for the warmth of the house. 8 x 6" plein air oil on linen/birch.
New Gallery! 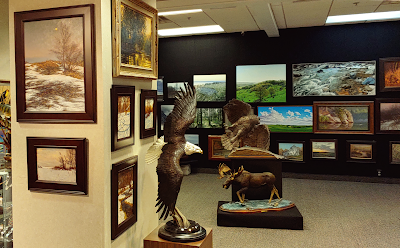 I'm so pleased to have delivered a collection of my winter paintings to the James Krom Natural Images Art Gallery and Museum in Rochester, Minnesota. 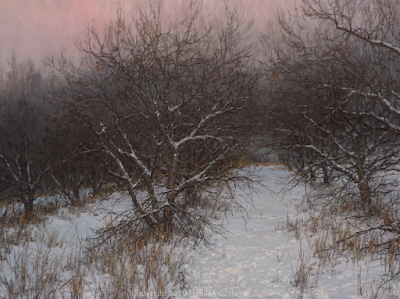 "Dusk in the Frozen Orchard", 18 x 24" oil on linen/birch. One of the pieces now available at the gallery.
Located in the Marriott Hotel - Peace Plaza subway level - this gallery is a trove of beautiful and skilled workmanship, from incredible wood carving, bronze sculpture and unique jewelry, to a wide range of paintings that celebrate the natural world - including work from two of my favorite Minnesota painters: Joshua Cunningham and Frederick Somers. It's an honor to be included.